Ferry to Germany and the journey begins!

Germany - A Country For All Seasons.

Germany is undoubtedly an EU powerhouse. As one of their many luxury car brands would say, the country is powered by vorsprung durch technik – which translates into English as ‘progress through technology’. But there’s so much more to this varied country – one that has two millennia of history to talk about, many world-leading cities to explore and a landscape that offers something for everyone and in every season: this is where you can discover hot springs, Europe’s biggest beach and some of the coolest skiing in Europe.

Culture vultures will have their curiosity for the arts satisfied in the metropolises of Munich, Frankfurt and Hamburg. While nature lovers can enjoy an active, outdoorsy adventure in the Bavarian Alps, the Black Forest or the Rhine Valley.

As well as high-end cars, Germany has a few other notable exports. Oktoberfest is one and you’ll find this folk festival is now most probably celebrated in a city near you. But to get the authentic beer, food and fun experience, you’ve got to go to Munich. The capital of the Bavarian region, Munich welcomes up to six million people for Oktoberfest, which starts in September and runs for up to 18 days. If you’re visiting Germany at any other time, you can still get a flavour of the festival by visiting the Hofbräuhaus am Platzl. The world’s most famous tavern opened in 1589, the public were granted access in 1828 and it’s now open 365 days a year. Try the knuckle of pork and wash it down with a Hofbräu – it’s traditional!

Another German tradition that has gone global is the now ubiquitous Christmas Market. Inspiring similar events across the UK and Europe, German Christmas Markets remain the original and best. Leipzig market dates to 1458, making it not only one of Germany’s oldest but also one of the biggest: there are 250 stalls for you to explore across six areas – look out for the Saxon spruce Christmas tree which can be more than 20 metres tall. In Braunschweig, the squares around St. Blasii Cathedral are home to 150 artisans and vendors and their illuminated stalls: the perfect backdrop to browse culinary delights, crafts and grab a hot chocolate. It doesn’t get any more festive!

High on the tourist trail of course is the capital, Berlin, home to Germany’s No.1 tourist attraction, Brandenburg Gate. One of the few remaining parts of the Berlin Wall, it’s now a national symbol of peace and unity. Imposing, impressive and Instagram famous, this incredible landmark is 26 meters high, features 12 Doric columns and the Quadriga, a four-horse chariot carrying the goddess of victory.

Outside of its urban landscapes, Germany is dotted with historic towns and villages, forests and mountains. Germany has around a staggering 20,000 castles, including Nueschwanstein, the model for the Disney Castle seen in every opening credit. The Black Forest is one of the most visited upland regions in Europe and as well as being a haven for hikers, you can take a ride on the Railway or drive the Black Forest Panoramic Route: just grab a map and get behind the wheel!

We have three routes to Germany; to Rostock from Trelleborg, Sweden, to Kiel from Gothenburg, Sweden and to Travemünde from Liepāja, Latvia – useful to know if you’re planning a European road trip! We offer comfortable cabins on each route to suit every budget, with everything you need to relax and get refreshed for the road ahead.

Germany - A Country For All Seasons.

Germany is undoubtedly an EU powerhouse. As one of their many luxury car brands would say, the country is powered by vorsprung durch technik – which translates into English as ‘progress through technology’. But there’s so much more to this varied country – one that has two millennia of history to talk...

Enjoy a trip to Germany 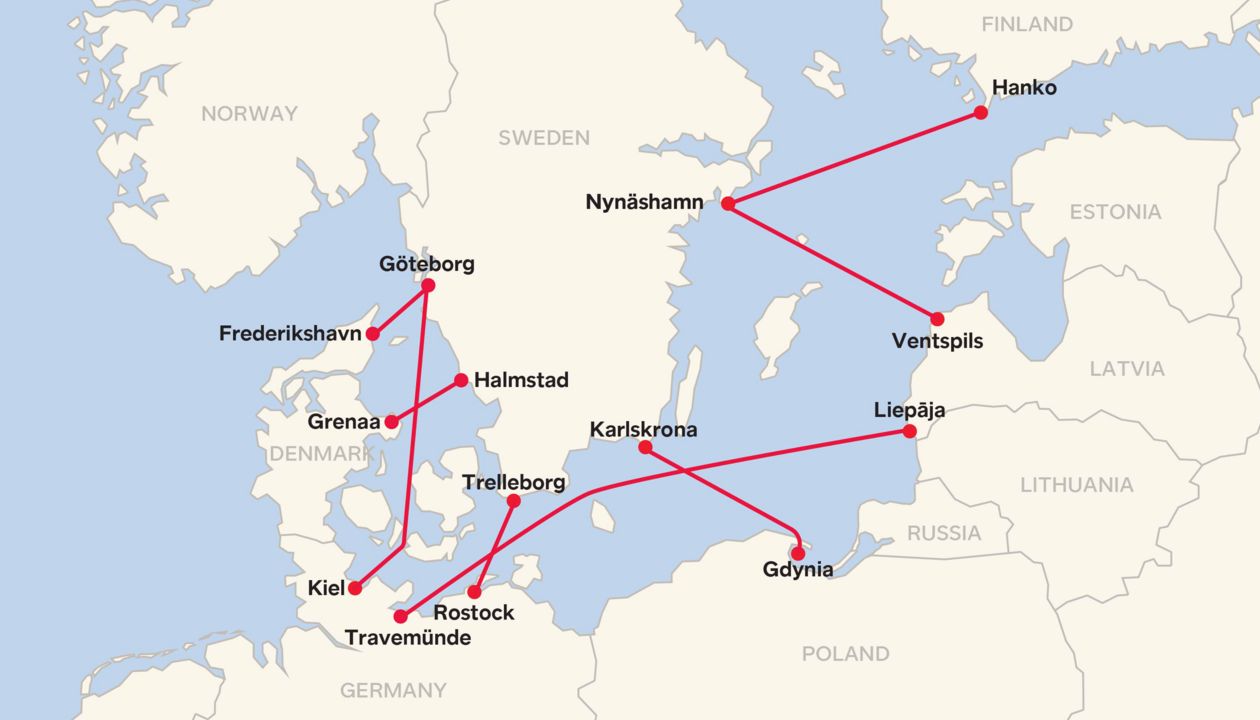 The port of Kiel is situated on Germany’s Baltic Sea coast and is easily accessed by road from the A7 and other major routes. Public transport links are good with the main rail and bus station being only 10 minutes walk from the terminal.

Rostock Port on the Baltic Sea coast of Germany is situated at the end of the A19 and is well signposted so very easy to reach by car. Regular bus services are also available for foot passengers.

Travemünde Port is part of the famous and historic Hanseatic town of Lübeck and is located by Lübeck Bay on the banks of the River Thrave, about 20km from the city centre. The port is well sign-posted from the A1.

Enjoy a trip to Germany

We’ve sent you an email. Please click the link in it to confirm your subscription.

Do you have questions or need help with your booking? Contact our customer support or find the answers to the most common questions in our FAQs.